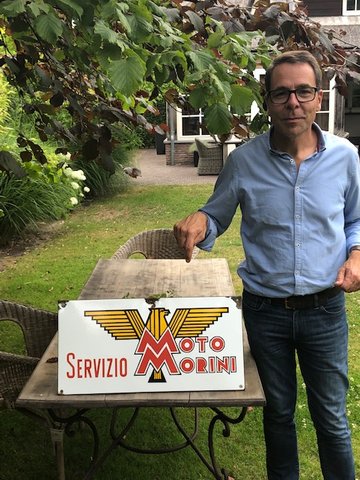 In 1988, I bought my first motorcycle which was a 1976 Moto Morini 3 ½. Fallen in love whit its looks and definitely Italian styling I very rapidly found out the bike was also superb in handling. During three years the 350 was used very intensively and provided, to say the least, very satisfying memories. Later on the Moto Morini passed to my girlfriend and later wife Inge and I bought a larger capacity motorcycle which was a Ducati 600. But after a while we both had to retire from motorcycle riding due to professional and familiar matters. The Ducati was sold and the 3 ½ was dismantled and stored in boxes.

The interest for Italian bikes although did not let me loose and after a few years I visited an Italian motor jumble. I knew that Moto Morini stood for more than only “3 ½” but was astonished to see what the Bolognese manufacturer had produced in all those pré 1970 years. Several visits to Italy followed which produced the purchase of several fine single cylinder Moto Morini bikes. My interest and affection for the Bolognese brand was growing and besides motorcycles I also started to collect magazines, original brochures and photos. When my collection of information was growing I found out that, with exception of a few specialized magazines, a lot of articles already written about Moto Morini were incorrect or not complete. Compared to other illustrious motorcycle brands a book on Moto Morini was not yet available. At least not what I had in mind what the story of Moto Morini should be.

After some considerations, I took up the challenge of unearthing the complete history of Moto Morini with the aim to bundle the information into a book. This was going to be, to say the least, a demanding task. I wanted the job to be done properly always bearing in mind the lesson learnt from my father: no half work! Interviewing the surviving Moto Morini legends was primary on my list. After all they could tell me the real story. I started to search them and got in contact. Although some reacted a bit doubtful on my phone call to agree for an appointment, once arrived they all received me with a very warm welcome. Besides their endless fascinating stories they also opened their shoe boxes full with incredible period photos.

After finishing the interviews I started to write out the story which, to be honest, was a job I seriously underrated. This labour of love was done fore and aft with limited means and often interrupted by familiar and professional matters. I have written this book as an enthusiastic passionate not as technical specialist or historical expert. I am aware that not all facts are complete or 100% accurate but above all this book is realised for those enthusiasts who share the interest or might learn more about the fascinating story of Moto Morini. “Sempre Più Forte” is a historical analysis of the complete Moto Morini history and intended to give everyone the chance to relive the glorious aspects of all Moto Morini bikes. The title of this book was taken from a collection of original technical drawings. Each drawing of a race engine or bike was named and thus catalogued under “SPF” which can be best translated as “always getting better.” For me this expression says it all!

Until today Moto Morini is still acknowledged because it demonstrated that passionate men with limited means could build exciting and high desirable motorcycles.

Meanwhile the passion is to be continued in my family. My youngest son recently has acquired a Corsarino 50cc Super Scrambler which, with some help, is beautifully restored.  With the job of writing this book finished we are now planning to restore the 3 1/2 in order to bring back my first Moto Morini, now evolved to a family heirloom, to its former glory!